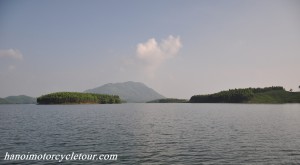 Northern Vietnam is not only famous for colorful hill tribes and imposing mountain passes but also luckily owns some beautiful lakes and Thac Ba lake is one of them that almost motorcycle tours in Vietnam take it as a outstanding destination.

Thac Ba Lake is one of three Vietnam’s largest artificial lakes and famous for the first hydro power plant. Thac Ba Lake is known as an actractive eco-tourism site and a largest man-made lake in Vietnam, located in Yen Bai province – 170 Km to the north of Hanoi. The experienced team of Hanoi Motorcycle Tour can organize some offroad motorcycle ride from Hanoi in 2 or 3 days to the lake and see around.

Thac Ba Lake was created in 1970 by the construction of a dam on the Chay River. Thac Ba reservoir covers a total area of 23.400 ha, of which 19.05 ha is water area and the remaining 4.35ha of islets on the Reservoir. The length of the Reservoir is 80km, maximum width is 10km, the average depth is 15 – 25m and maximum depth is 42m.Thac Ba lake Vietnam – Short Motorbike Ride from Hanoi

This artificial lake has 1,331 islands and hills with diverse ecological environments. The water in the lake is blue and clear, and imprinted with the reflections of the surrounding ancient forest. It know as another Halong bay in Vietnam and ideal place to relax and have rest after a offroad motorbike tour in Vietnam. 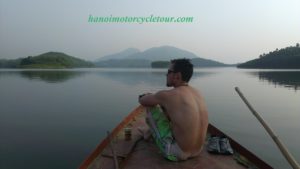 Tourists travel with Vietnam Motorbike Tour Expert can go to visit Thuy Tien cave, Xuan Long cave, Cao Bien and Chang Re mountain, Trinh Nam island … Coming to Thac Ba, tourists can also discover the natural beauty of primitive forest and thousands of islands, rocky mountains.Thac Ba Lake is not only a beautiful landscape, it is also a national vestige. In 1285, the Thu Vat Battle took place under the command of Tran Nhat Duat against Mongolian invaders. During the resistance war agaist the American, Thuy Tien cave is the revolutionary base of Yen Bai provincial committee.Thac Ba lake Vietnam – Short Motorbike Ride from Hanoi

Thac Ba is recognised a place of historical and cultural interest by the government. There are major plans to develop eco-tourism resorts in the surrounding area. For a long time Thac Ba Lake has become Yen Bai people’s pride.

There are 12 ethnic minority groups such as Dzao, Tay, Nung, Cao Lan, Phu La.surrounding Thac Ba reservoir. These ethnic minority groups feature their own special and colourful traditional festivals. Coming to Thac Ba lake, tourists will have chance to enjoy speciality fish dishes, such as ven (bream), lang (hemibagrus), qua (snake-head), bong tuong (goby) and thieu bac (culteralburnus). In addition, the ones do motorcycle tour from Hanoi can have chance to experience the hidden charm of Vietnam by doing home stay with one of the hill tribes nearby the Thac Ba lake.

After years of route researching, the local team of Hanoi Motorcycle Tour can make some great offroad motorcycle tour to the lake for 2,3 or 4 days.